What is midfoot arthritis?

The midfoot is an area in the middle of the foot. Midfoot arthritis develops when the midfoot joints have damaged or worn out cartilage. It predominantly affects the  second and thrid tarsometatarsal joints.

Midfoot arthritis is characterised by pain, swelling and stiffness. Usually symptoms develop gradually overtime. There is often an associated bony prominence on top of the foot. The foot can change shape, with progressive flattening or collapse of the medial arch.

Why does midfoot arthritis develop?

Midfoot arthritis develops for several reasons. The midfoot is predisposed to developing post-traumatic arthritis following a midfoot fracture or dislocation, for example a Lisfranc injury, even if initially well managed. Osteoarthritis of the midfoot can develop even in the absence of an injury. The midfoot can be affected in patients with inflammatory arthritis, for example rheumatoid or psoriatic arthritis. Tibialis posterior tendon dysfunction is when the medical arch of the foot can flatten and overtime arthritis can develop. Disorders of the first ray/ big toe may transfer weight to the middle part of the foot and result in midfoot arthritis.

What are the available treatments for midfoot arthritis?

In the first instance simple treatment measures are recommended to try and reduce your symptoms. These can have significant benefit and help avoid having surgery.

Weight loss if you are overweight can be extremely effective to lessen further joint damage and reduce midfoot pain.

Appropriate footwear should be tried consisting of a supportive stiff soled shoe. Alternatively a “rocker bottom” shoe can reduce the forces going through the midfoot joints whilst walking.

An Orthosis (a medical insole) can be useful in improving foot function and reducing pain by supporting the foot. You can be referred to the Orthotist for a specialist opinion.

Physiotherapy may be beneficial in the early stages of the condition to keep the calf muscles stretched and avoid overloading the midfoot whilst walking.

Steroid injections into the midfoot, although more invasive, can help reduce pain and inflammation. These can be performed under Ultrasound guidance. This can releive pain for several months. Pain may recur, but it does help avoid surgery. 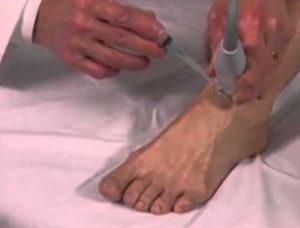 Surgery for midfoot arthritis can be used, once all simple treatment measures such as insoles, painkillers and injections have been exhausted and if your symptoms remain significant. Surgery can involve removing any bony prominences on top of the foot but most often entails a midfoot fusion of the painful joints. 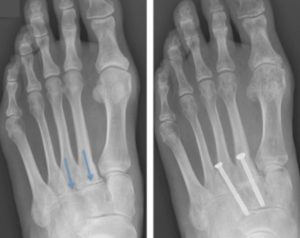 Above: Shows 2 screws used to fuse the midfoot painful joints